Last 15th of March, Standard & Poor’s decided to upgrade Portugal’s credit rating to BBB, an announcement quickly followed by the one of Moody’s, which, chose to leave the one of Italy unchanged. Later this months the S&P’s maintained Spain’s rating at A- with a positive outlook, opening the debate on a future increase in the short run. In a climate of Bond Rallies, those decisions drove investors to rush on those countries’ bonds, as well as those of their neighbors.

What parameters did rating agencies consider in their assessment? What can we expect from the apparent recovery of “Mediterranean” economies in the debt capital markets, both sovereign and corporate?

In Portugal, the reforms undertaken by the government over the last years appear to pay off as the countries’ economy is expected to grow between 1,5% and 1,7% during the next two years. Moreover, Portugal is expected to record a budgetary surplus (including the debt reimbursement) by 2020, allowing them to reduce their debt to GDP ratio. Enough for S&P’s to upgrade the countries’ credit rating.

The picture seems a little less bright for Italy where the Treasury revised its GDP Growth estimate to 0,1% , after slipping into recession in the second half of 2018. Moody’s decision appears to be more motivated by next week’s agenda and it still unclear whether the other rating agencies will also postpone report scheduled at the end of May. Indeed, the vote on 2020’s budget proposal is scheduled next month and the possible increase of the Value Added tax with it. Moreover, the outcome of the EU election is likely to have an impact on the Government’s policy.

In Spain, S&P’s decided to maintain the current rating of A- with a positive outlook, although some analysts were expecting to see it rise. The agency pointed out that their position could evolve in the coming months if the government manages to consolidate the deficit level and improve the payout of exterior debt. On the political side, the outcome of the Catalonia crisis and the anticipated election could also be preponderant. The Spanish economy is expected to grow at 2,2% this year and then deaccelerate as the economic cycle will mature, sustained by a growing internal demand, according to S&P’s. The rating agency also expects the private consumption to rise as salaries will keep growing. Nevertheless, the recent growth of the minimum salary could reduce the pace of new employments creation.

Shortly after Moody’s decision to leave Italy’s Baa3 credit rating unchanged, the Italian Treasury 10y Bond yield was pushed to 2.42%, its lowest since May 2018. Its spread over Germany’s narrowed to its tightest since last September at 234 basis points, far from its end of 2018’s level when it crossed the 300bp.

On its side, Portugal’s 10y bond yield dropped to its lowest in at least 25 years, to 1.25%. This only confirmed the market trend as the gap over Germany has narrowed by about 30 basis points since the start of the year and was last at about 137 basis points after investors rallied on the German Bond, pushing it to negative levels.

At the end, Spanish 10y Yield curve could be even more significant to analyze investors views on the region. Indeed, if S&P’s announcements on Spain didn’t influence consequently its 10y Yield curve, the one on Portugal’s upgrade had it decreased by 4.5%. Now looking back to the last 6 months, the Spanish curve went from 1,73% to 1,10% since October, showing investors overall optimism on the region. 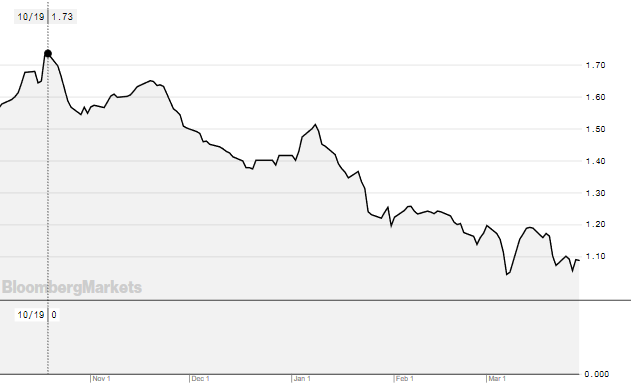 To recall, Spain broke a national record on its 10-year bond sale last January, with about 47 billion euros of orders on a 10 billion-euro issue. This paved the way for Italy and Portugal to go out in the market. But the most iconic case is surely the one of Greece that issued its first 10y Note in the last decade after Moody’s improved the country’s credit rating to B1 with stable Outlook. This allowed Athens to capitalize on it and go test investors’ confidence after the mixed success of a previous a shorter-term bond sale two months before. In the meantime, yields on old 10y bonds dropped to their lowest since 2006 (It is currently trading around 3.77%). To recall, Greece is just going out of one the biggest recession in its history and was disabled to issue new bonds, receiving emergency loans from the EU and the IMF for financing. This drove the Government Bond 10y yield to a record high of 48.60% back in 2012.

It is usual to see banks benefit from countries upgrades, especially in southern Europe. This time, the upgrade of Portugal’s rating was quickly followed by S&P’s rising Santander’s long and short-term credit rating in Portugal to BBB and A-2. In Spain, Fitch improved Abanca’s rating to BBB- and F3, meaning that the Galician bank is now considered as Investment Grade. In the meantime, it increased Liberbank’s rating from BB to BB+ with a stable outlook.

It could not take so long to see the trend spreading to companies which are partly owned by local governments or with the biggest exposure to such economies.