WHEN EURUSD WILL BREAK THE PARITY (17MARCH2015)

The recent EURUSD spot move is drawing a new FX world picture. The acceleration of the move has been quite unusual for the last 5years (between the summers 2014 and today EURUSD spot lost almost 25%).

The market seems consolidating the current level around 1.0500-1.0700 which gives us the opportunity to analyze the situation.

What has changed in the EURUSD market which can explain this spot acceleration?

We can easily find arguments to demonstrate that what happened was predictable but without back trading consideration lets summarize some facts.

At the countries levels, Europe has to manage social tensions and political crisis. Greece, Ukraine, France (extreme right party increase) are elements which can explain the lack of trust in European countries to manage those issues.

Terrorism represents as well in Europe a threat particularly imminent. European institutions have, by consequences, to deal between urgent threats with heavy political process and unlikely consensus making any solution very slow.

At the financial level, Central banks seem more and more isolated with a bigger distance with real problematic and finally a panel of solution quite limited to fix the economic situation. The SNB PEG release has been the perfect demonstration of this situation. By unexpected decision EURCHF collapsed from 1.2000 to 0.8500 in less than one day, making the FX market much more volatile and strengthening the trust issue in those institutions.

All CHF exporters have seen their margins considerably reduced by that decision jeopardizing the Swiss economy. Even if the PEG was probably very expensive to maintain and unilateral decision created an extra tension to a situation already uncomfortable. In Europe, ECB decision to unleash QE seems to convince less than in the others countries due to the fact that it is difficult for nineteen Europeans nations to do the same thing. In New Momentum, we saw a lot of our customers (corporates and Institutional) believe finally in a limited centrals banks impact on the economic world.

What are the market anticipation and why the idea of breaking the parity is more and more credible?

One of the best way to have the market feelings about a trend is reflected in the market prices and more particularly in the FX options pricing. Why those products particularly because every parameter is priced: the level of volatility given by the implied volatilities and the smile which included the asymmetry between the upside or downside level (given by the Risk Reversal or RR).
The implied volatilities for example moved from the lowest levels ever this summers at a level almost three time higher (3 Months implied volatility moved from 4.88% the 30june14 to 11.31% actually (Bloomberg source).

The acceleration of the move is as important as the current level itself because it traduces the market tension with the current situation. All the elements explain in the previous part contributed for sure for a good part of it but the technical level of the current spot around 1.0500 very close of the psychological level of the parity maintains a high level of uncertainty. Let´s relativize a bit those levels, in capital market world, FX remains an asset with the lowest volatilities. For example Lehman crisis brought EURUSD 3 Months implied volatility at 23% when the VIX reached more than 45%. Last point, does an asset with 25% move in few months is worth 11% vol Implied? The ratio seems to us still interesting even if the best level of the last summer seems definitively gone.

The smile component completed this analysis by the information regarding a trend. The 3 months 25d RR is quoting 2.10% PUT EUR over, it means that a PUT EUR 25d (strike 1.0165 with 1.0600 spot) will have a volatility 2.10% higher than CALL EUR 25d (strike 1.1003 with 1.0600spot). In other word the market is paying more to buy a hedge in the downside than the upside. Higher is the extra cost, more the market is ready to pay for the downside. To translate that with the market data the 3 months 25d RR moved from 0.55% PUT EUR over this summer at 2.10% currently, or almost 4 times higher. 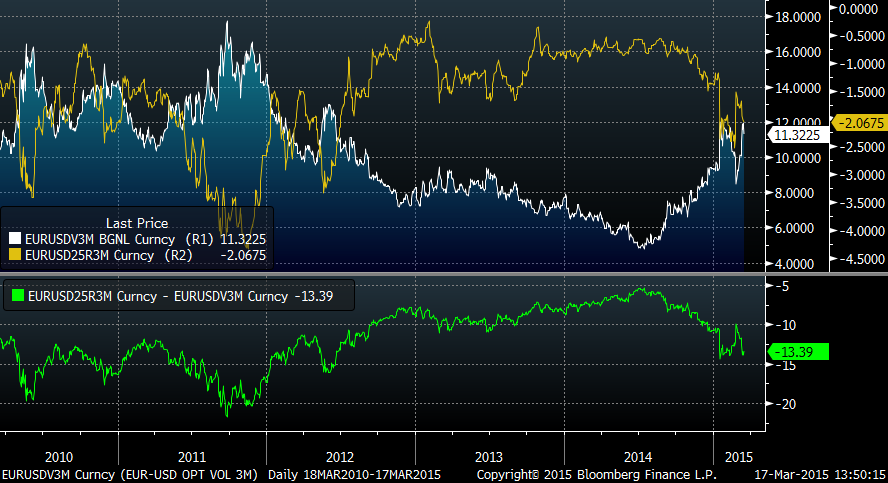 The green curve reflects the spread and we see that during the last summer we were in a configuration where volatility and smile were the cheapest. It traduces a very interesting idea probably more explicit in the graphics below that PUT EUR 25d was on its cheapest level. 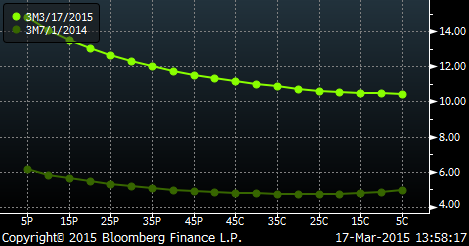 Between this summer and today, the PUT EUR 25d increased from 5.30% to 12.67%. This reflects all the ideas expressed above, the market prices the bearish trend much more than 8 months ago. An interesting exercise can complete this demonstration, let´s consider the current spot 1.0600 (to be able to compare the volatility and smile effect we will assume a constant spot at 1.0600) and let´s take the 01july2014 market data and the current one:

What does that mean? If we had the July market data today, the strike would be closer than the current spot. The fact that we see more than 200pips between the two strikes reflects that today the market anticipates a much bigger potential on a downside movement. A corporate exposed to a EURUSD lower will have to pay a more expensive premium to get a hedge at a similar strike.
The previous elements finally have shown that the market anticipates all the current events as a serious and credible risk for EUR against USD (or others currencies).

It would be probably interesting to quantify that risk and get some answer about a potential timing. Once again a part of the answer will be given by the market pricing but instead of considering vanillas options we will focus on One Touch options which reflects the price during a maturity to touch a certain level. On a spot ref of 1.0600, a 3 Month One Touch 1.0000 is priced 28% and a 6 Months One touch around 50%. In other words, the EURUSD Spot has 50% to reach 1.0000 in 6 months regarding the market anticipation.

Beside the mathematics, what would change a break of the parity?

Let´s consider another effect very important and probably underestimated by the market, the psychological impact of a EURUSD below the parity. In New Momentum, we see a lot of customer under hedge on a level below 1.0000. That fact mixed with the bank risk aversion is creating a perfect situation for an acceleration below the parity. It means that the market is probably long EUR and will contribute to a panic situation when everyone will run behind their exposures. A lot of market experience disappears from the banks with the new bonus regulation, making the market with less memories than before. The recent EURCHF movement can give us a good idea of what can be a market panicking. Even if for the moment we believe in a consolidation of the spot (if any politic announcement or critical event happens), however we are firmly convinced than below the parity all the negative effects will accelerate the trend.